News / Your last will and testament (France)

Your last will and testament (France) 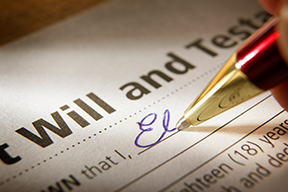 France imposes forced heirship, so you cannot use your will to leave assets freely. However under Brussels IV you can opt for UK succession law to apply to your estate.

France imposes forced heirship, so you cannot use your will to leave assets freely. However under Brussels IV, you can opt for UK succession law.

Moving to live in a new country involves considerable planning, and once you arrived in France you probably found you had quite a long checklist of tasks to get through. A key one is reviewing your estate planning; starting with, though not necessarily limited to, your will. Since none of us are immortal, do not risk leaving it too late or your heirs could end up struggling to sort out your estate in a country with unfamiliar foreign laws and bureaucracy.

You need to have a will that is appropriate for the national laws of the country you are living in. It is often advisable for UK expatriates to have at least two wills, one for the assets in the country they are resident and one in the UK covering assets located outside the country of residence. It may also be worthwhile to have a will in other territories where you own assets, to avoid the delays associated with using a will established elsewhere.

A UK will may be effective in France, but a major disadvantage is that it will have to go through the UK probate process. This will inevitably create long delays and high costs, as well as having to be notarised and translated before being accepted in France.

Apart from the need for suitable wills, you need to observe the local law regarding succession. In most Continental European countries, children have a statutory right to an inheritance and the statutory provisions may be used to override your wishes.

Needless to say, English law is not the same as the law of other jurisdictions. If you own property or other assets in France, whether you live here full time or just have a holiday home, it is advisable to make a French will to deal with your French assets. It is much easier to wind up an estate using a local will, rather than one established in another country.

It is important to note that, when drawing up wills in the UK, it is the practice to include a provision to automatically revoke all earlier wills. So if you make a French will, and subsequently change your UK one, make sure your solicitor knows about your French will so that he does not inadvertently revoke it, with quite unintended consequences.

In the UK, with a well drafted will you can you leave your assets to the beneficiaries of your choice (within reason). French succession law, governed by the ‘Napoleonic Code’ is very different. It imposes forced heirship rules requiring that a specified minimum proportion of your assets must pass to your children as follows:

The balance of your estate may be left to your chosen beneficiaries under the terms of your will. However, a will cannot override French forced heirship law.

The EU succession regulation 650/2012 (known as ‘Brussels IV’), which came into effect in August 2015, allows foreign nationals to opt, through a statement in their will, for the succession law of their country of nationality to apply on their death. So British expatriates can now avoid French succession law by electing for UK law to apply to their estate instead.

Take specialist advice before making this election though, as it may have unexpected consequences. It is still obligatory for a French notaire to handle your estate, even under UK law. Adopting UK law could negatively affect your existing succession planning arrangements, and may mean your estate becomes liable to UK inheritance tax as well as French succession tax (which continues to apply regardless of which law you choose).

Think carefully about appointing or changing executors, particularly if the will is to establish ongoing trusts for children or grandchildren. A family member, or good friend who knows your family well, will provide a useful link between them and the trustees.

Adding a professional executor, who will provide guidance on the not uncomplicated responsibilities of trustees, can help keep disputes outside the family circle.

You can avoid disputes over how belongings like jewellery and art are distributed, by including a ‘letter of wishes’ in your will to allocate these gifts.

It is not necessary to spell out every gift in your will. These items, under the general heading of “personal chattels”, can be left to the executors to distribute according to your letter left with the will. The letter can be changed as often as necessary, and without formality.

Good estate planning is about achieving the peace of mind that your affairs are in order and that, as far as possible, what you want to happen will happen. It is essential to take professional advice on matters such as wills and inheritance tax planning to avoid unexpected consequences for your heirs.

You can also help your family with practical matters by drafting a “my legacy” document to work alongside your will. This can outline your funeral wishes, who needs to be contacted, where your important documents are stored etc. A single point of reference like this can be very helpful and comforting to your family at a difficult time.

At Blevins Franks we focus on helping our clients create the optimum ‘estate plan’ to meet their wishes for their family and heirs and to minimise the impact of inheritance taxes. Contact us if you have any questions or would like us to review your estate planning for France.