News / Where do the British like to retire to in Europe? #2: Malta

Where do the British like to retire to in Europe? #2: Malta 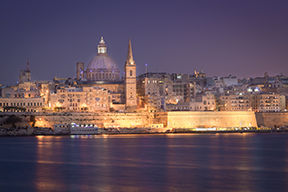 In our second in this series, we take a look at why Malta features as one of Europe’s most popular retirement spots among Britons. With a friendly, mostly English-speaking population, year-round sunshine, rich history and beneficial tax environment, this archipelago nation offers an appealing blend of familiarity and escape for Britons seeking a retirement by the sea.

This group of islands, smaller than the Isle of Wight but with a population of around 450,000, has always been a favourite for retiring Britons. A warm and friendly local population – where over 80% speak English – is attractive in itself, but there is also appeal in its stable political and financial system and relatively benign tax regime.

Malta operates its own version of domicile, similar to that of the UK. Residents of Malta who do not have Maltese domicile (and who are not resident in Malta as a result of a residency programme) only pay tax on Maltese source income and gains and overseas income which is remitted there.

Maltese scale income tax rates up to a maximum of 35% usually apply, unless you work in the financial services, aviation or gaming industries. As these are business areas that Malta is concentrating on expanding domestically, a flat rate of 15% is in place to encourage residents from those fields.

Income arising overseas but not remitted to Malta is not taxable, whilst overseas capital gains may be remitted without taxation applying.

The general position on pensions in Maltese double tax treaties is that pensions and annuities are taxable in the country of residence. The exception here is government service pensions, which normally remain taxable in the state in which they are paid.

This would seem to be an attractive position for UK nationals resident in Malta with private or company pension schemes, if they retain them offshore. But a small clause in the UK-Malta treaty states they will only be exempt from UK taxation if the UK national is remitting the full amount to Malta (which HMRC will review).

A QROPS (Qualifying Recognised Overseas Pension Scheme) can overcome this issue by shifting the UK pension scheme to a jurisdiction outside of the treaty’s scope. This, in turn, enables pension funds to be received tax-free from the UK perspective, and only liable to taxation in Malta to the extent that it is remitted.

UK tax-efficient investments have no benefit in Malta, where they will be taxable. Anyone wishing to draw upon their investments to live on should therefore consider restructuring their financial assets, ideally before relocating.

A Maltese-compliant offshore life assurance bond can house a wide range of asset classes and investment types in varying currencies. These arrangements are deemed ’non-income producing’, which means that not only can they grow in a tax-free environment, but that any withdrawal remitted to Malta is free from Maltese taxation.

There is no inheritance tax or gift taxes in Malta, but stamp duty is chargeable on transfers of Maltese real estate at 5%, and on certain Maltese company shares at 2%.

UK nationals will remain liable to UK inheritance tax if they retain their UK domicile.

Under Maltese succession law, forced heirship reserves a portion of the estate for the spouse and children, which varies depending upon the number of children. For UK nationals residing in Malta, the new EU succession regulation, ‘Brussels IV’, introduced in August 2015 allows an individual to elect, via their will, for the laws of their country of nationality to apply. However, it does not alter where successions taxes are payable.

Ultimately, while Malta can offer a highly favourable tax environment for Britons looking to retire to a place in the sun, expert guidance is recommended before relocating to secure the best results.