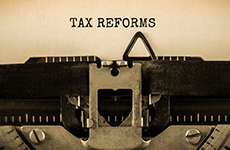 Following election promises to aid business growth and simplify taxation on financial assets and income, President Macron has presented various significant tax reforms in his draft 2018 French budget. With proposed changes including a new flat rate for investment income and a gentler version of wealth tax, these could mean lower tax bills for many expatriates in France.

President Emmanuel Macron promised various tax reforms during his electoral campaign earlier this year. Now his draft budget for 2018, having been presented to the French parliament on 27th September, is subject to possible amendments before the final vote at the end of December.

Aiming to encourage people to save more by simplifying taxation on financial income, the two key measures outlined are:

Under current rules, investment income – interest, capital gains on shares, dividends, etc. excluding rental income – are added to other income for the year and taxed at the progressive rates of income tax, ranging from 0% to 45%. Income is also subject to 15.5% social charges.

However, under the flat tax proposal, investment income would become liable to one fixed rate of 30%, regardless of the amount earned. This 30% would include both the income tax and the social charges – so the income tax part would be equal to 12.8%.

This new flat rate would apply to investments over €150,000 per person (so €300,000 for a joint policy). Savers in low-income brackets will keep the option for progressive income tax rates – otherwise, they could be liable for more tax under the new system.

The social charges payable on investment income will increase by 1.7%, taking the total to 17.2%.

In fact, social charges will increase by 1.7% on all types of income. That means the amount payable will be 9.7% for employment/self-employment income, 9.1% for pension income, and 17.2% for investment income, including rental income.

Currently, wealth tax is payable for those resident in France on 1st January where the household taxable wealth exceeds €1.3 million. It is based on worldwide assets, from property and investments to jewellery and cars. The first €800,000 is exempt from this tax, with rates then rising from 0.5% to 1.5%. Non-residents are only liable on assets they own in France.

M. Macron’s plan is to reform this tax so that it will only apply to real estate assets, with savings and investments becoming exempt. However, there has been a proposed amendment from within his own majority to capture ‘ostentatious wealth’ such as luxury yachts, premium sports cars and precious metals. Whether this will be upheld or not will become clearer in the coming weeks.

While not yet approved, these potential reforms could be significant for higher net worth individuals. If implemented, they may actually encourage those wealthy people who live off their capital and assets (and the returns earned on them) to move to France.