News / Crunch-time for Brexit talks – can we move on?

Crunch-time for Brexit talks – can we move on? 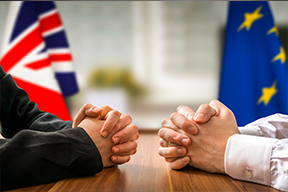 After six official rounds of Brexit talks, December is the crucial month when the EU27 decides whether “sufficient progress” has been made to move to the second phase. This would mean moving beyond the key divorce-related topics – financial settlement, citizens’ rights and the Irish border – to discuss the future trading relationship.

While the UK is keen to move on, the EU first wants to ensure that the three opening issues have been resolved. They are expected to make their decision at an EU summit on 14th-15th December.

What are the remaining sticking points and what are the implications for expatriates?

Initially, Prime Minister Theresa May offered to pay around €20 billion up to 2020, falling far short of the EU’s expectations. However, in late November, she agreed to fully honour Britain’s financial commitments – estimated at around €40-50 billion but potentially double that amount.

For now, this seems to satisfy the EU27 and is seen as a huge advance towards opening up trade talks in the new year.

Both sides agree that today’s rights must be maintained for EU nationals settled in the UK and British nationals in the EU. The key outstanding issue is how they are enforced by law.

As well as freedom of movement and residence, citizens’ rights include access to healthcare, education and social security benefits, and also employment issues like leave and working conditions.

For the EU27, citizens’ rights must be enforceable outside national jurisdictions to protect against the whim of politicians. Chief EU negotiator Michel Barnier maintains that EU nationals in Britain can only receive the “same level of protection as in EU law” through the European Court of Justice (ECJ).

However, Theresa May insists on sovereignty for British courts. While she suggests they should track EU law and “take into account the judgment of the ECJ”, this does not match the “indispensable role” that the EU27 requires.

The government’s EU Withdrawal Bill proposes transferring EU laws to UK law in bulk on Brexit day, at which point the ECJ’s authority ends and individual laws can be altered or scrapped entirely through Parliament. Although amendments would still have to abide by UK laws (such as the Human Rights Act), they would no longer be restricted by EU legislation (like the Charter of Fundamental Rights).

Mrs May has softened her initial ‘red line’ stance by signalling a future role for the ECJ in settling disputes on British soil, and suggesting it could retain jurisdiction during a transition period. Whether this is good enough for the EU27 or there is more compromise to be made from Britain remains to be seen, but agreement here is essential to progressing negotiations and providing certainty for citizens on both sides.

In a no-deal scenario, expatriate rights would depend on individual agreements made between the UK and their country of residence. So far, Spain has been the first country to reassure British expatriates there that their lives will not be disrupted in the event of no formal deal. This is encouraging for expatriates elsewhere, as countries enjoying a similarly close relationship with the UK may follow Spain’s lead. See more about Spain’s commitment

According to Theresa May, a no-deal outcome on citizens’ rights is unlikely as she intends to secure reciprocal rights with “an urgency”. She claimed that they are “within touching distance” of finding an agreement on rights for citizens on both sides.

This is now the biggest obstacle to securing a green light from the EU27.  While Northern Ireland is set to hold the only UK-EU land border post-Brexit, there is reluctance to reinstate a physical border – although this seems unavoidable if the UK leaves the customs union.

Mrs May looked set to finalise a divorce deal with European Commission president Jean-Claude Juncker that included retaining Northern Ireland’s access to the single market. However, this proposal – and therefore the entire deal – was vetoed at the last minute by the Democratic Unionist Party (DUP) insisting that Northern Ireland leaves the EU “on the same terms” as the UK. The Prime Minister relies on DUP support for her majority government.

In further negotiations with the DUP and the EU, Theresa May plans to secure an acceptable deal prior to the make-or-break EU summit. For Jean-Claude Juncker, this “very last round” of initial Brexit talks is expected to result in mutual agreement. He indicated that the next phase would focus on Mrs May’s proposed two-year transition period before tackling future trade arrangements.

Although neither side plans to walk away without a deal, both are preparing for the worst case scenario. In last month’s UK Budget, the Chancellor set aside another £3 billion over the next two years to prepare Britain for “every possible outcome” as it leaves the EU. The Bank of England has now made UK banks carry an extra £6 billion buffer to withstand a disorderly Brexit.

Without a formal agreement in place by March 2019, one major concern is that UK businesses would face a ‘cliff-edge’ where they can no longer legally trade in the EU. For expatriates with UK personal pension and insurance contracts, this could mean they would not be able to receive payments outside Britain post-Brexit. However, most agree that this situation is far from likely, as neither side would benefit. At the very least, a transition period is expected to avoid a cliff-edge and provide more time to phase in change.

In the meantime, nothing changes for expatriates living in the EU. If you are resident in France, Portugal, Spain, Malta or Cyprus before Brexit, the way you are taxed will not be affected and, as things stand, you can still transfer your UK pensions without penalties.

However, you could benefit from reviewing your financial planning and exploring your options before any changes take place. A locally-based adviser with cross-border expertise can help you secure financial peace of mind and prepare for Brexit developments that might affect you.

Contact Blevins Franks today if you have any questions.