News / Brexit and beyond (France)

Brexit and beyond (France) 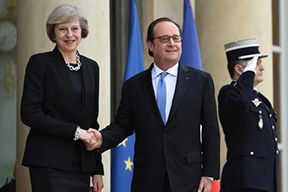 We hope Brexit doesn’t prevent anyone from fulfilling their dream of living in France. There are steps you can take to protect your finances from the uncertainty surrounding the UK’s exit from the EU.

We hope Brexit doesn’t prevent anyone from fulfilling their dream of living in France. There are steps you can take to protect your finances from the uncertainty surrounding the UK’s exit from the EU.

Brexit has been all over the news again, with the British Prime Minister, Theresa May, announcing her negotiating plans and MPs voting to trigger the process by the end of March. A 77-page White Paper released on 2nd February has also spelled out the government’s intended approach.

Theresa May revealed her Brexit vision is that Britain “cannot possibly” remain in the European single market. Instead, she wants to achieve the “freest possible trade” with EU countries in a “new and equal partnership”. The current benefits of EU membership will most likely be negotiated one-by-one after Article 50 is triggered – a process that will take at least two years.

This uncertainty can be unsettling for those living in or planning to move to France, but we are optimistic that Britons will continue to enjoy the benefits of living or owning property in this beautiful country. We are finding that many UK residents who had been thinking of moving to France are acting now, so that they are resident in France before Brexit is implemented. Others are considering whether to transfer UK pensions before Brexit takes effect.

Here we take a look at the financial implications of Brexit.

The Sterling to Euro exchange rate was the most immediate issue to hit expatriates in France and those planning on buying property there. Sterling may continue to be affected as Brexit negotiations unfold, but we cannot know to what degree or when the exchange rate will start to improve.

At the time of writing on 6th February the exchange rate is 1.16, and while this is poor compared to the 1.30 we had the day before the June referendum, it is worth remembering that it had fallen as low as 1.02 back in December 2008. UK nationals continued to move to France and buy property, and this may well continue.

And currency can move in both directions as new events unfold, such as the elections in France, Germany and Holland this year.

Depending on your situation you may find that you have to revise your short-term expectations of what property your savings can buy while Sterling is weaker, but sellers in France will not want to lose their UK customers so hopefully they will take the exchange rate into account.

You also need to consider what currency to hold your investment assets in. Ideally you should receive some income in Euros so that you are not making a currency conversion every time you take income in France, though you may want to wait for a better rate until you switch assets to Euros. Even then it may be a good idea to have both currencies; like most things to do with your investments, diversification is the key to managing risk. Much depends on your personal situation so talk to Blevins Franks to establish what will work best for you.

Note that you should not necessarily have to invest in Euros even if using an EU investment arrangement; you can keep your capital in Sterling. What you need is an investment structure that has a multi-currency facility. This would allow you, for example, to invest in Sterling now and switch to Euros (if you wish) at a later date. It should also give you flexibility in how you take withdrawals.

Your investment portfolio should always be carefully constructed around your current (and expected future) circumstances, needs, objectives, time horizon and risk profile. A move to France therefore warrants a review of your savings and investments.

Many British investors tend to favour UK assets in their portfolio, even when living abroad. Indeed UK advisers often structure their clients’ portfolios this way, but that may not be the right balance for you if you make a permanent move to France.

With Brexit, diversification is more important than ever before. Markets have proved quite resilient so far – the FTSE 100, for example, ended 2016 at an all-time high – but we have yet to see how the UK economy will be affected as the exit negotiations unfold. You should review your portfolio to see if you are overexposed to UK assets and consider how to improve diversification over different assets classes, countries, sectors etc.

For many people, Brexit will have no impact on how they are taxed in France, or taxed in the UK on French assets.

If you live in France, the same tax rates apply to all residents, regardless of nationality. If you receive income from the UK, tax treatment is determined by the UK/France double taxation treaty. The same applies if you are a UK resident and have France source income. Such double tax treaties are agreements reached between two countries; they are independent of the EU and so are unaffected by Brexit.

There are a couple of circumstances where taxation may be affected. For example, assurance-vie life assurance policies are an effective way of holding investments in France and can provide significant tax advantages. However, the beneficial tax treatment given to EU policies would no longer apply to UK bonds once the UK is no longer an EU member. So you should seek advice on the best arrangements for your investments and tax planning.

Note also that France levies an exit tax on share gains made by individuals who leave France after being tax resident for six years. The tax charge arises the day before you leave, but payment is deferred where the individual moves to an EU member state or an EEA state that has a mutual assistance agreement with France. If you move to a non EU/EEA country, tax can also be deferred, but you will need to appoint a tax representative.

If you are moving to France to work, you may be able to take advantage of Article 155B of the French tax code, which provides special tax incentives for individuals coming from overseas to work in France. Following Brexit, the French government said that it wanted to make France Europe’s “most favourable” fiscal regime for returning expatriates and foreign executives. The tax benefits of this special impatriates regime have been extended from to eight years from January 2017.

The France/UK double tax treaty on death is independent of the EU, so nothing will change with regards how your heirs are taxed or how you are taxed on inheritances you receive from the UK while living in France.

When it comes to succession law, under 2015’s EU succession regulation, Brussels IV, British expatriates can opt for UK succession law to apply on their death instead of French law. Although an EU law, it applies to third party countries as well, so UK nationals can continue to use it after Brexit.

However, you need to be aware that opting for UK law may have unexpected negative consequences (unrelated to Brexit) so do seek specialist and personalised advice.

All in all, we hope that Brexit does not prevent anyone from fulfilling their dream of moving to and living in France. To protect your finances contact Blevins Franks so we can guide you through all the various implications of Brexit, discuss the pros and cons of moving now or waiting, and keep you updated on any key developments.