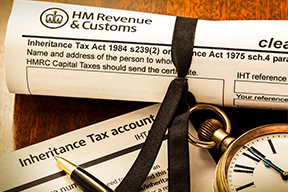 More and more families are being caught by the UK inheritance tax net. Are you up-to-date on the rules and can you protect your family?

More and more families are being caught by the UK inheritance tax net. Official figures released by HM Revenue & Customs at the end of July confirm that the UK government received £5.2 billion in inheritance tax payments for the 2017/18 tax year – the highest ever.

Figures released by the Treasury with the November 2017 budget revealed that it expects IHT receipts to rise to £6.5 billion by 2022.

At the same time, the IHT nil rate band has been frozen at £325,000 since 2009. Previously it increased every year with inflation.

The annual exemption for lifetime gifts has been frozen at £3,000 a little longer – since 1981!

An additional Residential Nil Rate Band (RNRB) came into effect last year (see below), but has yet to affect the figures.

Reforms to the non-domicile rules could also help increase the government’s IHT earnings. These could affect UK nationals living abroad.

With effect from April 2017, it now takes four years, instead of the previous three, to lose your UK domicile of origin after moving permanently abroad and adopting a domicile of choice in your new country.

Foreign born UK residents are now deemed to be UK domiciled after living in the UK for 15 out of the last 20 tax years (previously it was 17 years).

This was the biggest change to IHT for a number of years.

From April 2017, a new ‘family home’ allowance is added to the standard £325,000 nil rate band. This is being introduced gradually as follows:

Thereafter it will increase in line with the Consumer Price Index.

Like the standard allowance, any unused amount can be transferred to your spouse. This makes a total potential threshold for a couple of £1 million in 2020.

There are limitations though:

– The RNRB only applies to property, and only that inherited by direct descendants.
– It must have been your main home at some stage (but it can be outside the UK).
– Only one property can qualify.
– The property must be passed directly to your children/grandchildren, so the allowance does not apply to property owned within many types of trusts.
– A limit is imposed so higher value properties do not benefit. Where an estate is valued at over £2 million, the allowance is tapered, £1 for every £2, so estates valued at over £2.25 million (for the 2018/19 tax year) will not receive any RNRB at all.

While any reform which reduces the IHT tax bill for our heirs is very welcome, this one has been criticized for being too complex – and some families may be missing out as a result.

In February UK Chancellor Philip Hammond asked the Office of Tax Simplification to review the “particularly complex” IHT regime and submit proposals to make it simpler. It is due to report back in the autumn, in time for the budget. It will be interesting to see what it suggests for the residential nil rate band, as well as the other convoluted IHT rules.

Around one in 20 families currently pay inheritance tax, but this is expected to increase to one in 10 in the future. Since liability rests on domicile rather than residence, being an expatriate does not automatically protect you. Now is the time to take action to protect your family from this tax, as much as you can. Cross-border estate planning can be a minefield so take specialist estate planning advice to make sure you get it right and are taking advantage of all the planning opportunities available.